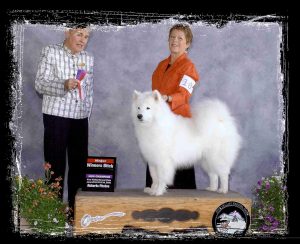 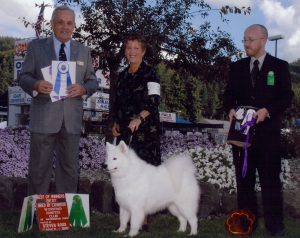 Following in the family tradition, Kiri went Best of Winners from the Bred By class and Best Working at the Samoyed Club of Washington State Specialty, August 2007
Thank you to judge Col Joe B Purkhiser
Kiri also placed Best Working Bitch at the 2007 Samoyed Association of Canada National Specialty, Calgary AB 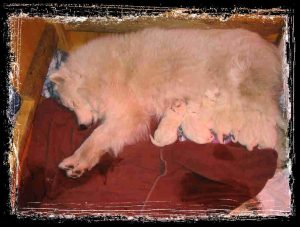 Kiri, like her older brother Solo, was one of the Gandale agility superstars, having titles in the Canadian Kennel Club(CKC), the American Kennel Club (AKC) , the Agility Association of Canada (AAC)and the North American Dog Agility Council (NADAC), and to top things off for 2006, she placed first in both her agility classes (Novice Standard and Open Jumpers with Weaves) at the 2006 US National.

She was also a superb sled dog, conformation show dog and mother. The three puppies that were shown from her first litter (Smokey, Vixen and LeeLoo) all finished their championships quickly and with style! Her conformation, attitude and work ethic represents exactly what my breeding program is all about. 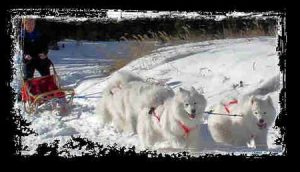