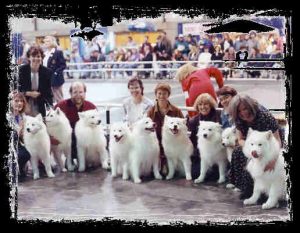 Bindi and her kids and grandkids at the Edmonton Kennel Club show.

Bindi was the foundation bitch of Gandale Samoyeds and my first “show” Samoyed. Born in the United States in 1983, she lived to the age of twelve, and she is still sorely missed. She was an excellent brood bitch, and kept me company during my summers doing research on ground squirrels in Kananaskis Country in southern Alberta. She spent her summers running free in the mountains, and was never very impressed with the rigors of the show ring. But she knew her job and did it because she knew I wanted it.

Her first litter was also my first litter and the first time I had ever seen puppies being born. She was bred to an amazing male, Canadian American Champion Skookluk’s Kus-Ko Kid (Buddy, shown below), loved and shown by CoraLee Ingram (who left us far too soon) and Barbara Rivers. The resulting litter was the beginning of the Gandale line. 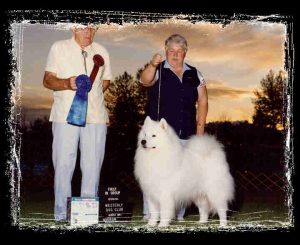