Our first Samoyed came into the family in 1970. I bought him for my parents following the death of their small dog, and they immediately fell in love with him. Puk (registered as Gandale) was with the family for almost 16 years.

I was living in Florida when, a couple of years after Puk joined the family, I decided it was time to get a Samoyed of my own. He was Beast (registered as Gandale Two), born in 1973, who shared my life during the transition from Florida to Alberta and who passed from it far too soon, dying of a brain tumor at the age of 9. 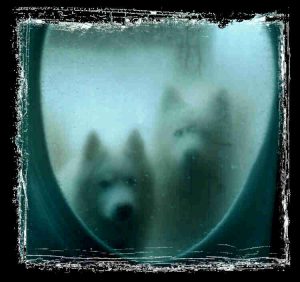 Puk (left) and Beast looking in through a snowy door in Mississauga Ontario.

There are many ways of grieving the loss of a pet. For me, the choice was to honour Beast by getting another Samoyed as soon as possible. I had met Sandra Post of Jasam Samoyeds through the Edmonton Samoyed Club so I contacted her to see if she was aware of anyone with puppies.

Sandra was importing a male puppy from Montana , and she knew that one of his sisters was still available. The puppies were from top show lines, so their breeder wanted the puppies to be shown. I had never been interested in showing, and had never even been to a dog show, but I was young and willing to try anything!  So in 1983 Bindi entered my world, and the rest, as they say, is history.

I have known and loved many wonderful Samoyeds in the years since Puk became part of the family, and breeding and showing sams has brought some marvelous people into my life. I look forward to what the future may bring.